About us | London Terrace Towers in New York City 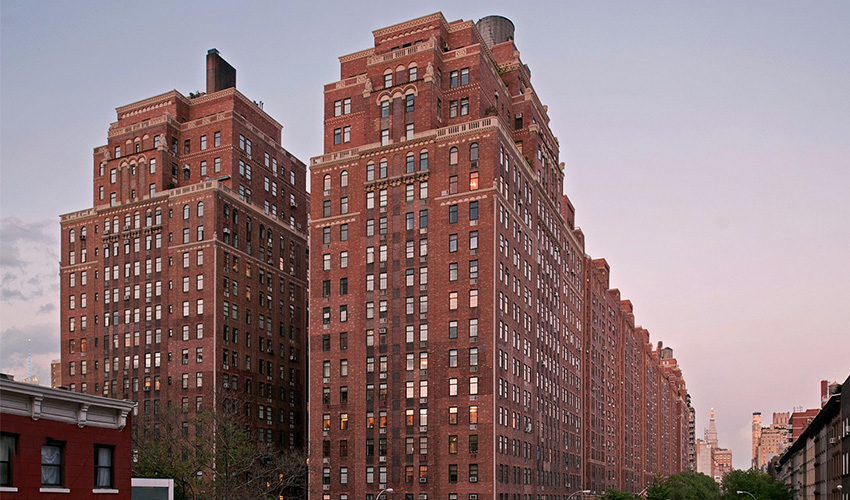 The signs say “London Terrace” and the publicity releases proclaim “The Great Briton in Manhattan,” yet the buildings hark back to early Tuscan architecture and the traditions of Lombardy. Could the incongruity be nothing more than a marketing ploy to exploit perceptions of English charm? 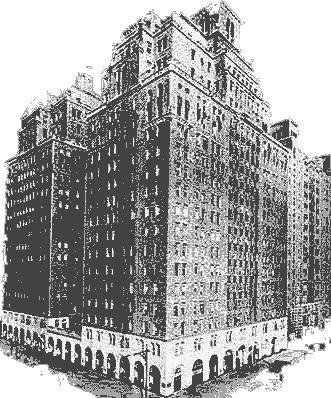 The reality, in fact, lies in the whim of an old military man more than two centuries ago. Seeking a retirement home, Captain Thomas Clarke bought a large piece of the old Somerindyke farm in 1750 and named it Chelsea, after his native London’s Royal Hospital at Chelsea, where old soldiers spend their final years.
About midway between Ninth and Tenth Avenues, just south of what is now West 23rd Street, the captain built a “snug harbor” that he called the Chelsea House. By 1776, though, he was bedridden and near death. A fire destroyed his home that year, and soon he was gone too.
But the property stayed in the family. His widow rebuilt the house and defended it against British troops during the Revolutionary War, and remained there until her death in 1802. Her daughter, Charity, inherited the property.
She added it to the holdings of her husband, Benjamin Moore, the Episcopal bishop of New York and president of Columbia College. In 1813, the couple deeded the land and its buildings to their son, Clement Clarke Moore. Although the younger Moore’s life stretched from the middle of the Revolutionary War to the middle of the Civil War and included an impressive series of accomplishments, he is best known for having written in 1822, the magical poem that begins, “T’was the night before Christmas, when all through the house….”

Clement Moore was also a far-seeing businessman who understood good urban planning and canny real estate development. With his friends James N. Wells, a local real-estate broker, Moore carefully divided his lands into lots conforming to the new street pattern and sold them for fine residences. To establish suitable neighbors, he donated an entire block to the General Theological Seminary (whose buildings and grounds are redolent of the colleges at Oxford and Cambridge) and gave land on West 20th Street to St. Peter’s Episcopal Church for a rectory and a sanctuary.

He then began a major development project encompassing the block from West 23rd to 24th streets and Ninth to Tenth Avenues. On the shady West 24th Street frontage he built the Chelsea Cottages: wood framed two-story housed for working people. The entire West 23rd Street frontage was improved with 36 grand brownstone row houses, all set well back from the pavement behind hedges and trees. Each dwelling was designed in the popular Greek Revival style, creating a uniform vista of three-storied pilasters and recessed spandrels with Greek key carving. Completed in 1845, the development was called London Terrace, expanding on the English allusion first expounded by Captain Clark almost a century before.

Moore insisted on high-quality constructions, raising the value of his remaining property. Recognizing this, he razed the family seat across from London Terrace in 1853 and sold the land. On the site, elaborate row houses were built in the flamboyant Anglo-Italianate style. Facing the then-still-new London Terrace, these later houses quickly earned the sobriquet “Millionaires’ Row.”

Moore died in 1863, but because of the complexities of his real-estate holdings, his estate was not settled until 1907. That was a year of financial panic (what we might today call a serious recession), which marked the beginning of the original London Terrace’s decline.

In the following years, what had been expensive one-family homes were subdivided into rooming houses and apartments. Extra floors were added to several of the buildings, and some were thrown together as institutions. Three midblock houses formed the Agnes Cloud Residence, while three more near Tenth Avenue were combined with a trio of West 24th Street cottages to form the School for Social Research “campus”.

As the buildings declined, however, the land value rose. Developer Henry Mandel recognized this and gradually acquired control of the block. By 1929 he had it all, at least on paper. Gaining actual possession, though, proved more difficult. He had not reckoned on Tillie Hart.

Hart lived at 429 West 23rd Street on a sublease that, she asserted, was valid until May 1930. The underlying prime lease had already expired, however, giving Mandel the legal right of possession. But Hart steadfastly refused to move, despite the demolition going on around her.

By October 1929, Mandel had demolished all the existing structures except Hart’s. Her increasingly histrionic tactics were duly reported in the newspapers, with her lawyers delaying the matter in court while she barricaded herself in, and pelted any would-be intruders with bricks and stones. The sheriffs managed to enter on October 25, however, and placed all Hart’s belongings on the front pavement. Obstinate to the last, she spent that night in the house sleeping on newspapers spread out on the floor. The following day she finally abandoned the fight, and the wreckers demolished the house in short order

Mandel, the spiritual forebear of the flamboyant builders of today, had recently completed two hotels and his luxury Park Avenue cooperative building. For his newly vacant block, he had decided to erect what was to be the largest apartment house New York City had even seen.

Mandel hired the architectural firm of Farrar & Watmough, a partnership formed in 1925 by Victor Farrar and Richard Watmough. Pleased with the round-arched and highly ornamental Tuscan style he had used repeatedly before, Mandel instructed the architects to use it for the new project.

An early scheme called for 12 buildings of 16 stories each along West 23rd and 24th streets, with a singly cross-shaped tower rising more than twice the height of the rest at Ninth Avenue. The landscaped center was to be protected on the Tenth Avenue side by a modest two-story structure.

The later plan, which was eventually realized, comprised ten midblock buildings with taller and bulkier structures at all four corners. The inner court was foreshortened to allow for a large, enclosed swimming pool at Tenth Avenue end and an equally large restaurant at the other. The design was accepted by the city’s Department of Buildings under the old tenement-house law of 1901. (With the more urbanistically sensitive multiple-dwelling law of 1929, the structures would not have been permitted to rise so high without setbacks.)

Mandel’s project was completed in two phases, with the ten smaller buildings finished in 1930 and the four corner towers constructed the following year. Despite the distinctively Southern Italian design and detailing, the complex picked the old name, London Terrace. Professor Moore himself was remembered at the cornerstone-laying ceremony, with his 15-year-old great-great-grandson doing the honors with the trowel. It was even asserted at the time that the cornerstone itself had come from the Moore’s family manse Chelsea House (unlikely, since that building had been demolished some 66 years earlier).

The buildings contained, within a single block, an astounding 1665 apartments. Most were either studios or one-bedrooms, with only a few large apartments in the corner buildings and at the terraced levels. With more than 4000 residential rooms, the density was vastly more than the worst slums of Calcutta.

Yet London Terrace’s special amenities were attractive: a 75-by-35-foot indoor swimming pool with balconied viewing galleries and adjoining locker rooms; a supervised rooftop play area for children; an equipped gymnasium; a penthouse recreational club; a sun deck for infants; a courtyard garden and a marine deck fitted out and furnished as if it were part of a great ocean liner. Set 21 stories above the street, this last element allowed residents to look down on the real life ships that docked a few blocks away.

Besides ready access to the on-site shops and services via the internal tunnels that connected the entire complex, residents could use and array of free services including: page boys for delivering message within the complex or running nearby errands; a telephone-message-receiving service that would bring the message slips to the apartments; and a mail-and-package room that would deliver to the apartments on call.

Topping the list of tenants who enjoyed these services were secretaries (202 of them), as well as engineers, attorneys, accountants and “presidents of companies.” They paid on average $30 monthly rent per room.

That seemingly low rate was possible only through imaginative marketing and “selectivity” in management. According to a contemporary report by the renting agent, William A. White & Sons, “Restrictions are especially important in London Terrace … [and] a careful check of business, social and financial references is made before leases are signed.” Notwithstanding that care, the Great Depression, which struck just as London Terrace was being completed, forced developer Mandel into personal bankruptcy in 1932 and precipitated foreclosure in 1934. A magazine article early in that year described this nightmarish financial morass, noting that “nobody is clear as to who owns what and what what is worth.”

The claims, counterclaims and changes in the title went on until 1945, when the ownership of the original ten buildings and the four corner towers was split. London Terrace Gardens (the inner buildings) continued as a rental. London Terrace Towers was eventually converted to a combination condominium-co-op (a con-dop). Under this scheme, a one-bedroom apartment that once rented for $90 a month was offered in 1988 for $150,000 to buy, with a monthly carrying change of $725. Taking into account what most New Yorkers earned in 1930s, the relative cost of that apartment probably has not changed all that much.

The four converted and renovated buildings are now called The Towers at London Terrace, and are marketed as “The Great Briton in Manhattan.” With advertisements featuring period photographs of Henry Mandel’s original doormen dressed as London “bobbies” (shades of Trump Tower’s original busby-hatted door attendants) and the emphasis on England in the promotional efforts, it would appear that the perceptions of English charm have remained constant of the intervening years. Old Captain Thomas Clarke would have been proud.